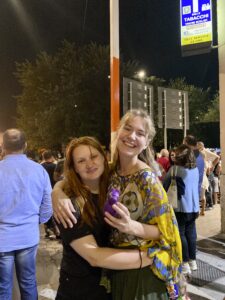 Name of the project: HOPE – Hands-On Project for Europe

We had just taken a night bus from Bari to Altamura, a small town in South Italy, when the person who was to pick us up broke their tire. So we sat on our backpacks in the bus station and listened to the distant Italian conversation happening near a fast food stall. At this moment neither of us could’ve guessed that this town would feel like home to us in the two weeks ahead. Another guy, Giuseppe, came to pick us up and we started our journey of the HOPE project from the 5th to 20th of September 2022, in Altamura, Italy. 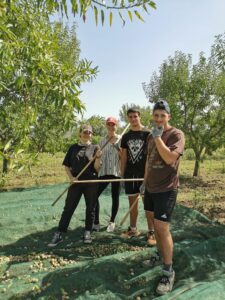 We enter the apartament and find a Spanish guy, Latvian girl, two French girls and another Spanish girl sleeping in our room; we were the last ones to arrive. The place was gigantic, with multiple balconies and more than enough room for the 7 of us living there. We threw our stuff on the bunk beds, had a small talk and drifted off to sleep.

The next day we were first introduced to Agorateca, a small public library in Altamura, with a small garden and signs of previous volunteer projects – kamishibai books, paintings on walls, books from different countries – all around the place. The long term volunteers directed the introduction and we met all of the other colorful characters that would be our company for our time here. The last part of the introduction section included establishing some common rules, the first one: “Be on time!” being so important that it was decided to create a second rule: “Don’t be late!” – both of which we learned to follow the Italian way 😉

The first week was spent in a nearby farm belonging to the association. The moment we got out of the van, our mouths didn’t have time to close from one surprise before another one came along. Fig tree, pomegranate tree, persimmon tree, grapes, plums – and we could eat everything we wanted! And so we did, since almost following the first two rules had robbed us the time to have a proper breakfast. Soon we were handed wooden sticks and shown towards long lines of trees, the center of our attention during the two weeks – almonds. 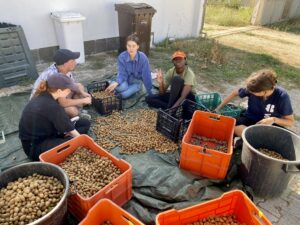 We were disciplined students of the Way of the Almonds and learned as much as one could about them. With the wooden sticks, when we weren’t using them as our mighty swords, we hit the trees so that the almonds would fall on the net we placed under there, then we would collect the almonds and clean them. Apparently, historically this work was done by women while the men were working on the fields. The last part, crushing the almond shells, however, was a source of great knowledge – there is indeed such a thing as eating too much almonds! The other significant wisdom we learned was the art of 3 hour long siestas in the shadows, eating focaccias while having idle conversations, napping while giving our sweaty shoes some ventilation.

During the second week the journey of the almonds continued, but 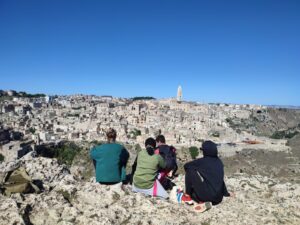 in a slightly different way. Now we learned to make use of our harvest by making soaps and sweets out of the almonds. For the sake of this part of the process we became scientists, experimenting with different recipes for just the right consistency, smells and decorations for the soap and the right mix of chocolate and almonds for the sweets. But perhaps the most scientistic we got, was while building our own solar oven and, of course, decorating it. The project concluded with an event where all our crafts and the tomato sauce from the previous project were sold for charity and a cultural dinner where the food was just as heavenly as the people and the dancing just as wild as the music. All in all, these two weeks in Altamura are ingrained in our memory as one of the most wonderfully dynamic experiences of our lives.