Previous Next
“Games for Everyone’’ Youth Exchange – INTERVIEW WITH ARINA, MIHHAIL, OLESYA, ROMAN, RUSLAN AND ZOJA 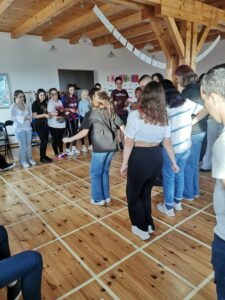 Name of the project:“Games for Everyone’’ Youth Exchange

What was the main topic of the event?

Zoja Krasina – The topic of the project was getting to know traditional games of other counties. 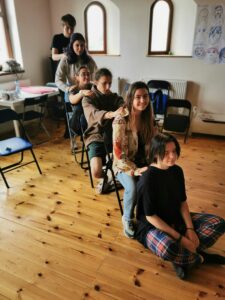 What were the biggest learning moments of the event for you?

Arina Raletneva – The biggest learning moment was the fact that even adults can still enjoy the game process same way as kids and that outside games help with reliving stress, finding your strongest points and skills and even socialization

Olesya Korchenova – That countries what are located in different sides of our planet can grow up on similar games.

Roman Matvejev – There are a lot of simular games in countries all around the Europe, and you can cross the language barrier by playing the games and have fun.

Zoja Krasina – I realized that even though I’m usually pretty active and doing sports, it was still hard for my body to spend the whole day outside playing games. And it’s pretty useful to play outside games, you could learn a lot from that. 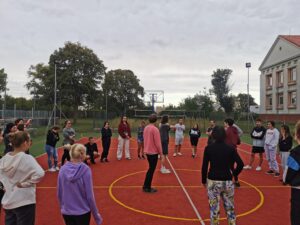 Do you have any plans to continue being active in the field? If yes, in which way?

Arina Raletneva – Absolutely yes, I would love to continue participate in such kind of projects, I can help with everything connected to design or preparing for the project and Im always ready to help in any way I could

Olesya Korchenova – I am taking a break from projects

Zoja Krasina – Yes, I plan to become a youth worker and to do my own projects. 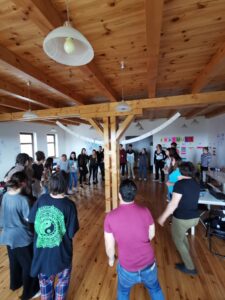 Would you recommend this experience to your friends? If yes, why? If no, why not?

Arina Raletneva – Yes, because I think that it’s such a good opportunity to visit another countries, improve your language skills, break the social barrier, find new intercultural friends, learn something new and just get a new unforgettable experience

Mihhail Žurakovski – I definetely would, activities were very energizing and they made me happy

Olesya Korchenova – Yes I will, erasmus always have been good way to challenge yourself and learn

Roman Matvejev – Yes, it was very fun project and a lot of games and activities that everyone enjoyed. We also had a free time and the site trips.

Ruslan Fomitšev – Yes, because exchange was on top level and everyone can learn something new there

Zoja Krasina – Surely I would recommend to try this experience at least once in your life. You have a chance to learn more about other cultures, other people, and most importantly, you could make a lot of discoveries about yourself.

Other comments or anything else you would like to share? You can answer in your mother tongue, if you want!