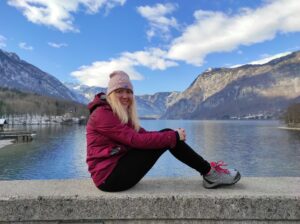 Name of the project: Kids in Action 8 – United in Solidarity

In the Summer of 2021 I had just graduated from University and didn’t know what to do next. From my friend’s request to join her, I took part in one training programme in Czech Republic. Although it was only for a week, I learned a lot from it and had great fun. This experience made me think that volunteering in a different country might be the right next step for me.

What followed was me searching for a project for over 4 months and almost giving up. I studied psychology in University and I also have a lot of hobbies (music, art, films, writing), so I wanted the project to somehow be linked with my interests. While there were a lot of projects with good topics, I didn’t want to sign up for something that I wouldn’t be completely invested in, since it is a long-term project. Therefore, I was picky with choosing. And also with the projects that I did sign up for, sadly I wasn’t picked for. So, I started thinking that maybe volunteering isn’t for me. 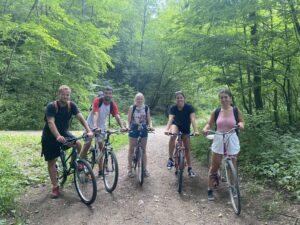 Fortunately, my luck turned around in the middle of December, when an organisation from Slovenia contacted me, saying they need a replacement volunteer, because one of their volunteers just left. The project seemed great and location interesting (I had never been to any Balkan countries before), so I picked up my courage and signed up. What followed was some interviews, paperwork and in a month I was already there. In hindsight, I am glad I waited for the right project, because it truly was a wonderful experience.

Before this experience I had been an exchange student for 6 months in Belgium, thus I wasn’t completely jumping into the dark waters and had some expectations. What I didn’t expect was how rewarding it would be to live together with 5 people from different countries: France, Belgium, Spain and Latvia. I expected it to be difficult, but it wasn’t so at all. We were all empathetic, friendly people that helped each other in every way. Of course, there were some growing pains, like how some roommates could steal your milk without always telling you and now you wouldn’t have milk for your coffee. But in the end, it’s okay, because they would buy it back in a day. In short, I learned that coffee without milk is also okay. But jokes aside, as someone that’s quite introverted and enjoys their alone time, I learned that I can be quite social and not feel tired if the company is wonderful. 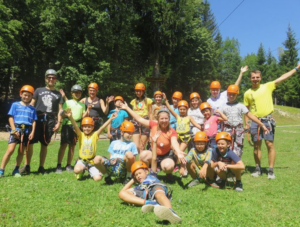 What I didn’t really have expectations for, was my work. I had never worked in a youth center, or that matter, with kids before. And now I was working in a different country with kids that for most of them couldn’t really speak English. Thus, the start was a bit rocky, since I am a bit shy and most kids also don’t trust a stranger right away. But luckily I had wonderful co-workers that helped me a lot. I learned there’s other ways of communicating, like facial expressions and body language, which worked surprisingly well. Also, kids were very open to getting to know me and children that could speak more English helped others, so in the end, it worked out quite well.

In this youth center the kids came after school to do their homework and spend quality free time there. So, I would help with their homework where I could (mostly English and math homework, that requires minimal Slovene) and would play board games, table football, ping pong or just draw and talk with them. Almost every day we also had workshops where we either did some arts and crafts, had a presentation about a topic or went to the gym to play some games. At first I was just assisting with the workshops but after some time I could also be in charge where I wanted and I got to do some presentations, for example about Estonia and psychology. It really taught me to show more initiative and be more open to communicate. In addition, I found out that I love doing creative things and sharing that passion with others. I got to paint a big tree on one of the walls for the center that will stay there for years. 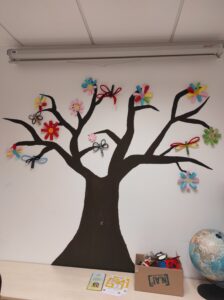 Before going, I knew virtually nothing about Slovenia. I found out it is one of the most beautiful places in the world with the high mountains, gorgeous lakes and cute villages. I lived in a small town close to Ljubljana – Škofja Loka. It had a nice castle and beautiful old town and I lived right in the middle of it. Also next to the town were a 1000 meter mountain called Lubnik. Altogether I climbed 3 times to the top. As someone that is used to Estonia’s very “high” hills I found out that I really like hiking in the mountains. Besides that everything is so close by. I got to travel to Italy, Austria, Germany, Hungary and Croatia. I met so many people that were from different countries. But I didn’t meet any other Estonians, which made me realise how special and unique Estonia is. I was also the first Estonian that took part in this project. So, in a weird way I felt more Estonian in Slovenia than I did back at home. But at the end of the day, it doesn’t matter where you are from. What matters is the content of your character. The wonderful people I met in Slovenia had beautiful characters and they left their doors fully open for me, a stranger, an Estonian. At the end of the project I didn’t feel like a stranger anymore.

Were there some hardships? Of course, but the negative moments are hazy in my memory, because the positives shine so much brighter and cast a long shadow. Like the tree that I painted on the wall, I felt like I created new branches in my mind every following month. I learned more about myself in those 7 months than I have in years. Volunteering really showed me the world in all of it’s colours and it gave me the courage to add my own.