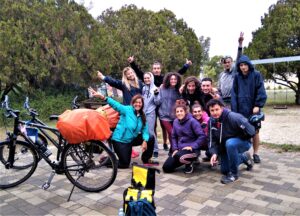 During the summer I saw a really interesting project in Italy but I was supposed to go to Sweden for University studies so I just ignored it. Time passed and I actually decided to cancel my admission for the studies and do something else because I felt the are is not really something I want to study in the end.

After I cancelled my admission I suddenly saw that the same cycling project in Italy is again looking for a female participant from Estonia and I thought that it has to be a sign for me to apply. I got the placement and I was going for 5 weeks to South of Italy!

The project was a group volunteering so in total our group consisted 10 people from Estonia, Romania, Italy, Spain and Greece. The first 2 weeks of the project we stayed in Lecce to prepare for a cycling trip we were going to have after that. Lecce is a charming city with beautiful architecture. It´s population is a bit less than 100 000 people but during the summer they have many tourists. In addition to that, the city has many Erasmus students from all over the world. 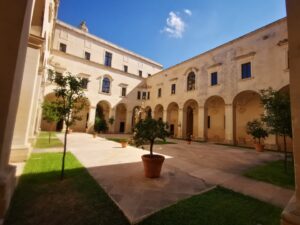 During the time in Lecce we took part of Fridays For Future strike, we learned more about bikes and how to repair them and take care of them. We did quite a lot of cycling to get used to it. We did several interviews with locals about cycling in Salento and the cycling culture in general. We introduced EU projects to the locals. We were planning the cycling trip and choosing the places we want to visit during those days on the road.

After 2 weeks of planning and getting ready for the trip we finally went on the road! The trip was 12 days long in total and we went through many small villages in Salento. We stayed in different  Bed & Breakfast places and did some workshops with the local youth to promote EU projects. In addition to that, we also cleaned two local beaches from trash. In total we cycled more than 300 kilometers and saw many small towns and villages. Although on the road  we got a lot of rain and also cold weather, I really enjoyed the trip. We saw some amazing landscapes and met many nice people. 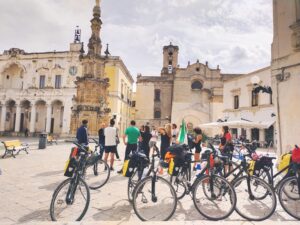 After the cycling trip for the last week we stayed near San Cesario di Lecce. It´s a village near Lecce, where also our hosting organization´s office was. During the time there we did some dissemination activities for the project and had our final evaluation and received our Youth Passes.

The 5 week group volunteering project in Italy was for me amazing and I really enjoyed it. We were being active, spending a lot of time in the fresh air, seeing beautiful places in Salento area and getting to know more about each other´s cultures.